I See You Made An Effort 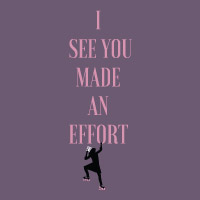 Written and performed by Annabelle Gurwitch
Directed by Bart DeLorenzo

I See You Made An Effort asks the question: Is it possible to enjoy just one night off from the hilarious indignities that are visited upon a woman of a certain age?

Synopsis: I SEE YOU MADE AN EFFORT is actress and author Annabelle Gurwitch's (Dinner & a Movie; You Say Tomato, I Say Shut UP; Fired!; NPR) hilarious personal accounting of hitting the half-century mark and the effort it takes to forge ahead.

Based on her New York Times Bestselling book of the same name,
I SEE YOU MADE AN EFFORT is an unflinching mid-life roller-coaster escapade that weaves biting social commentary with exhilarating pathos. Whether she's navigating the tricky waters of acceptable behavior with her teenage son, being hounded by the AARP, realizing she's aged out of her own Mrs. Robinson sex fantasy, or discovering her invisibility at a punk rock concert, it's the ultimate coming- of- middle-age story.

You will applaud until your 'gnarly hands' are raw! - Discover Hollywood

She is funny.
The lady can make us wince at and chuckle over each body blow! - Curtain Up