On Friday, Juneteenth, (June 19th), theatre communities around the country will provide their response to the current moment – the civil uprising that has come as a reaction to the murders of George Floyd, Breonna Taylor, Ahmaud Arbery and countless others before them – with simultaneous free readings of Vincent Terrell Durham’s bold new play, "Polar Bears, Black Boys & Prairie Fringed Orchids".

With a perfect blend of wit, pathos and humor, the play speaks to some of the most pressing subjects of our time – gentrification, white fragility, the Black Lives Matter movement, and police violence against Black bodies. The need for collective action – a commitment to speaking the truth and to begin dismantling systemic racism in our institutions – has never been greater and through Vincent’s words, our community can begin moving toward awareness and justice. 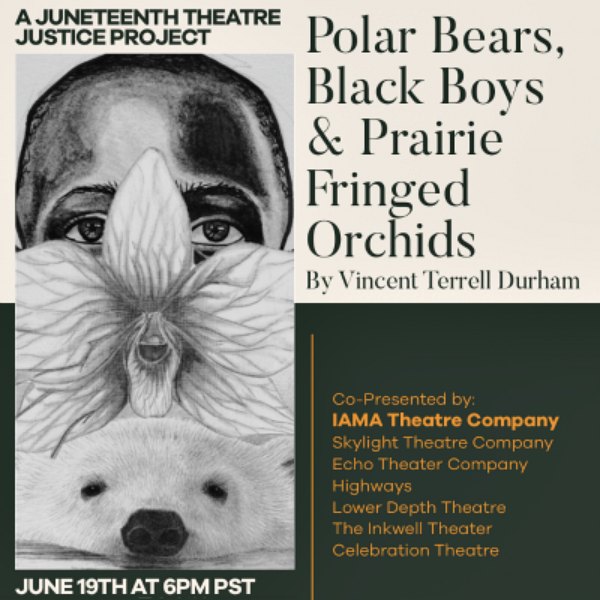 A liberal white couple open the doors of their renovated Harlem brownstone to host a cocktail party for a Black Lives Matter activist, his gay white lover, a sistah named Shemeka and the mother of a slain 12 year-old black boy. A night of cocktails and conversation spark emotional debates ranging from under-weight polar bears, Lana Turner, saving the planet, gentrification, racial identity and protecting the lives of black boys.

Vincent Terrell Durham is a scriptwriter, author and poet who first honed his storytelling skills as a stand-up comic in comedy clubs across the country. His plays include The Fertile River, Vol. 1, A Post Racial America, and Polar Bears, Black Boys & Prairie Fringed Orchids, among others. Polar Bears, Black Boys & Prairie Fringed Orchids was co-commissioned and developed by PlayGround and Planet Earth Arts and is a 2019 NNPN National Showcase of New Plays finalist.

About the Juneteenth Theatre Justice Project

The Juneteenth Theatre Justice Project was launched by Aldo Billingslea to center Black theatre artists and new voices, address systemic racism in the theatre industry, and help raise much needed funds in support of Black Theatres around the country (click here for information on the GoFundMe campaign).

FUND FOR BLACK THEATRE IN THE U.S.

All proceeds are to be distributed to fund Black Theatres.
The Juneteenth Theatre Project, inspired by Project 1 Voice, has created a committee, in collaboration with the Lorraine Hansberry Theatre, to distribute the proceeds of this fund to Black Theatres. Donations are 100% tax deductible.