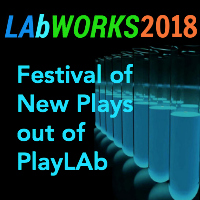 LAb Works is a festival of new plays created by resident playwrights at Skylight Theatre Company as members of PlayLAb.

This year the festival consists of 3 Workshop presentations and 7 Readings of new plays in development. All events are held in the Skylight Theatre in East Hollywood in the vibrant Los Feliz Village.

FALLEN COMRADE
Writer: Felix Racelis
Director: Rodney To
A librarian comes to terms with his most difficult patron, a homeless Vietnam war vet, who's also his father.

AMERICAN INSTITUTION
Writer: Tony Foster
Director: Mark Bringelson
A gay man begins to doubt the meaning of his own wedding as he becomes bombarded by a bunch of bitter divorcees. So much can go wrong in one day.

BAD MOON RISING
Writer: Karen Howes
Director: Robert Bailey
A tragi-comedy set in a small Mississippi town in 1974. A black blues musician is framed for murder after becoming involved with a young white woman who is inheriting a large sum of money. Those to blame include an unprincipled journalist, a corrupt politician, and a guitar player on his way to California.

THE INCREDIBLE HAUNTED HOUSE OF LEW MALLORY
Writer: Chelsea Sutton
Director: Katie Witkowski
Lew Mallory brings in a few ghosts to scare away the big bad Bank from repossessing her home. But she never guessed what ghosts already lurked in the walls, and her own life.

SPEAK NOW
Writer: Tim Furlong
Director: Shen Heckle
A not-so-young, not-so-rich couple's radical commitment to honesty is pushed to the breaking point in their journey to the altar.

THE WORLD AS IT SHOULD BE
Writer: David Myers
Director: Tony Abatemarco
Tired of complaining about the way the world is, Reno embarks on a environmentalist journey to power his life by bicycle. He enlists help from his friend Ida, a young woman whose life is quickly going off the rails. Can he save the planet, or even just make it a better place?

A DROP OF SUN
Writer: Penelope Lowder
Director: TBA
A science fiction futuristic drama centering on a vibrant African American colony, rocked by invading forces, that challenge the colony’s existing perceptions of cultural identity igniting a battle for their survival.

WINTER RULES ALL SUMMER
Writer: Tom Lavagnino
Director: Joe Basile
Four friends habitually play golf every Sunday morning, but when one doesn't show up, a random golfer gets assigned to their foursome. The three are then forced to deal with some very real truths -- and confront a complete re-definition of the term “friendship.”