See and Be Scene

In light of the COVID-19 virus, and in the interest of everyone's health and peace of mind, we have postponed our “See and Be Scene” Special Event honoring Artist-Activist Michael Kearns to June 14th.  There is nothing more important than the safety of our guests, artists, and staff. We are monitoring the situation closely and will notify you if anything changes. 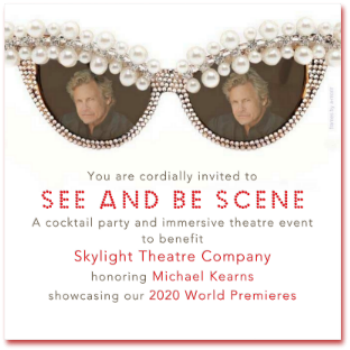 At Skylight, we nurture artists and introduce new voices to the American stage: artists whose stories might not be told otherwise.  We offer audiences a chance to experience the lives of individuals unlike themselves, and find connection.

On Sunday, June 14, connect with Skylight Theatre like never before.  Put yourself in the middle of the action!

Grab some wine and a delicious bite and wander at your own pace through the Ballroom at a Historic Club in Santa Monica, mingling among the actors to experience scenes from our world premiere plays: the provocative "West Adams," audacious "Lavender Men,"  and heart-opening "Never Is Now".

Then celebrate Skylight Artistic Associate, the renowned Playwright-Actor-Activist Michael Kearns, who will be honored for his Distinguished Contributions to Fellow Artists.

A Benefit Event
Tickets are $125

A nationally-acclaimed 501 (c) 3 nonprofit, Skylight’s world premieres have gone on to be performed Off-Broadway and across the nation, and have received every top Los Angeles theatre award including Best Book and Best Lyrics for the original musical “Bronco Billy” at this year’s 30th Annual Ovation Awards, and the 2018 LA Drama Critic’s Circle Award for “Best Production,” (tied with “Hamilton”) for the transgender love story “Rotterdam”.

Diversity, equity and inclusion are embedded in the fabric of Skylight.  It's more than multi-racial casting, it's telling stories that would go unnoticed or could be passed over as too controversial. It's taking a chance on someone without regard for age, gender, ethnicity or zip code.

You make this happen. We're proud of the recognition Skylight has received, but we're prouder still of our community of friends - audience, artists, and supporters.

Help create theatre that shows a new perspective and helps us connect in our polarized world. 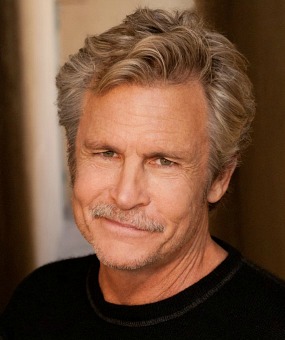 For nearly fifty years, Michael Kearns been a provocative and impassioned voice in the cultural and artistic landscape of America. Based in Los Angeles, he has achieved success in the theater (acting, writing, directing, and producing) while a passion for social justice has also driven his teaching career and his activism.

Perhaps best known as “the first out HIV-positive actor in the Hollywood industry,” Mr. Kearns is also beloved in the Los Angeles theatre community as a former Artistic Director of Celebration Theater; co-founder (with James Carroll Pickett) of two organizations dedicated to combating AIDS: the Southland Theatre Artists Goodwill Event (STAGE) and Artists Confronting AIDS (ACA, with Kearns as Executive Director until the early Nineties); and a frequent visiting artist at Highways Performance Space. He is currently the Education Director of Spoken Interludes (since 2008), an arts organization that brings professional writers into high schools. For ten years, he helmed a writing/performance class at the Downtown Women’s Center on Skid Row, resulting in the DIVAS (Dames Invested In Very Authentic Storytelling) which performed Spoken Word pieces throughout Los Angeles. Most recently (2011), Kearns founded QueerWise, a collective of LGBTQI seniors; the Spoken Word artists have appeared throughout the city—from Beyond Baroque to the Akbar in Silverlake and their home base, the Skylight Theatre where they mount an annual World AIDS Day show.

Michael Kearns has received the LA Weekly’s 2007 “Queen of Angels Award” for his contributions to Los Angeles theatre; a 2006 COLA grant as a writer-performer from the Los Angeles Cultural Affairs Department; the 2005 Robert Chesley Lifetime Achievement Playwriting Award, part of the prestigious Triangle Awards; and the 2002 Playwrights' Arena Award for Outstanding Contribution to Los Angeles, as well as awards from Celebration Theatre, among others.

Michael’s enduring relationship with Skylight Theatre Company, where he is currently Artistic Associate, began more than 30 years ago when he appeared as an actor in James Carroll Pickett’s "Dream Man" which became his signature role and subsequently toured throughout the United States and Europe. That led to a solo career beginning with intimacies, one of his first written and performed by pieces to look at AIDS head-on, resulting in additional solo work and five years on the road.  In 2011, he forged a partnership between Skylight and Broadway Cares/Equity Fights AIDS which continues to this day. His two most recent full-length plays, "Bang Bang" (2015) and "Bloodbound"  (2017), both received workshop productions at Skylight.